A forum for discusion, suggestions and information on any Snatcher-related material. Music, games, versions, differences and references.

Also the space for feedback regarding the Snatcher Music Arrangements section by MrRudi.
Post Reply
88 posts

I've been thinking about starting up the lifesize Metal Gear MKII project again and thought I'd bump the old thread back up again.

Looking back at my reference I stumbled across a few questions-

Where is this page from and is there a better scan available? 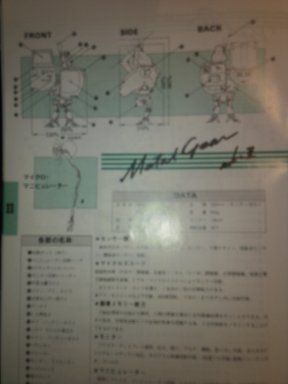 It look like this page has the best reference for the MKII retractable arm. The arm was never used in the Sega CD version but did appear briefly in the original- 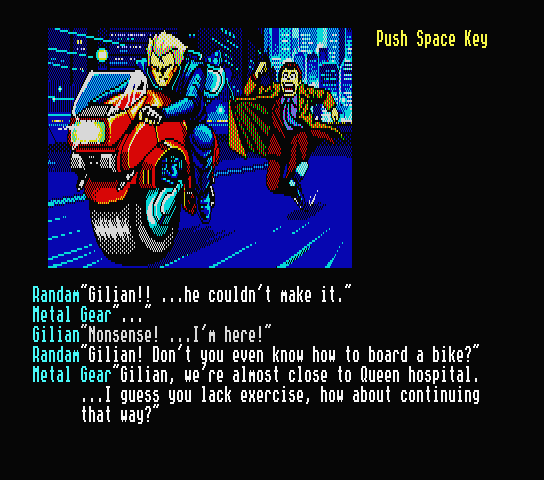 Also here are my blueprint blown up to full size. He's about 17 inches (43 cm) tall. I might tweek that measurement a little but it feel pretty nice still. Next I'll make a quick cardboard mockup of Metal at full size to see how he feels in "real life". I want him to be large enough tomatch the screens from the from the game but not so large that he can't be put onto a book shelf.

The image is from the PC-88 or MSX game manual (can't remember which one).

The arm was used in the Sega CD game, but never fully shown when you retirve Little Johns Memory Chip you see the tip/hand of the "arm" grabbing it.

But this should do? Same "Metal" design, and the arm "image" from the PC-E manual

I Can't wait to see how this turns out!

el_ash wrote:The image is from the PC-88 or MSX game manual (can't remember which one).

From what I remember, the PC-88 and MSX2 manuals are exactly the same.
Konami had both the PC-88's and the MSX2's System Information printed on one manual.

So, technically there's only one type of Print for 1988 versions, since they would have used it for both Systems.
「Желаю﻿ вам усцeхa!!
Ｊ・Ｕ・Ｎ・Ｋ・Ｅ・Ｒ・・・・」
Top

Awesome scans! Those mg mkii pics are even better than the ones I'm using from earlier in the thread.

nickdaring wrote:Awesome scans! Those mg mkii pics are even better than the ones I'm using from earlier in the thread.

No problem! I actually re-scanned them just for you since its a worthy cause

I'm trying to get a new scanner soon though since I'm limited to 300dpi currently (which is crap) ;(
"DAMN SNATCHERS!"
Game Remake

300 dpi isn't bad at all. In fact I'd say 90% of what you seen printed today existed as 300 dpi image files before being sent to the printer.

Also I went and grabbed a couple screen caps of the MKII arm removing the Little John memory chip for posterity.

nickdaring wrote:300 dpi isn't bad at all. In fact I'd say 90% of what you seen printed today existed as 300 dpi image files before being sent to the printer.

Also I went and grabbed a couple screen caps of the MKII arm removing the Little John memory chip for posterity.

Damn! You sorta beat me to it with those images...
I made a video showing the only time I can recall it shows that "port" for the arm actually open...from the same scene only on the PC-88 version.

Awesome! I still haven't done the MSX playthrough yet. So many cool differences!

If the the MG MkII build goes well I'd like to also make a Little John as well. This is excellent size reference for that!

From what I've seen, I think I like the way the game looks on the MSX better than the Sega CD. Much more dark and moody overall.

Started on the cardboard mock up last night. It's feeling pretty nice so far.

WOW! I'm pretty sure it will turn out amazing!

I messed up and attached the crotch piece upside down. Otherwise a very successful experiment.

If that's an experiment then the actual attempt should turn out perfect! Good work Nick!

Looks really good! Very curious to see how this turns out.
What Button Do You Press To Jump!?!
Top

Still slowly working on the project.

I found a digital photo frame that plays video and sound that I'm goin to dissect and turn into Metal's monitor. I'd like to eventually figure out a way to put a working PC in there so I can play Snatcher on him but for now just pictures and video will be pretty cool.

It even has a remote control so I can cue up sounds and movies from across the room.

I'm drawing up my blueprint for building and am having to combine certain aspects from several sources to create a MKII that averages out all the different variations. TOugh stuff.

Can anybody guess what it says above the red LED in the MSX version of the closeup MKII screen? - 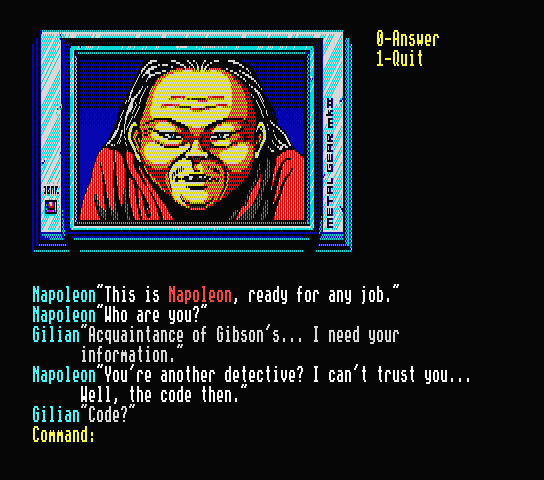 I'll probably go with the Sega CD version but it of course the difference has made me curious. 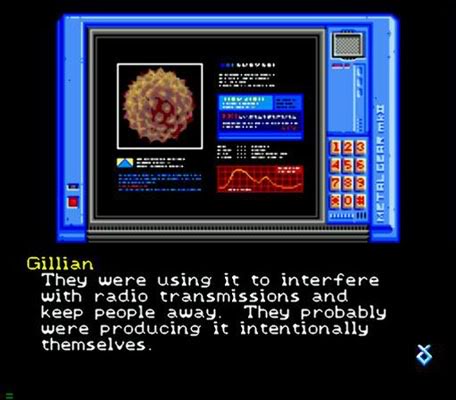 Yeah the Sega CD image threw me off as well...Since its the future I imagine all "keyed" info would be touch screen based?
Every image of Metal in-game besides the close up of the screen suggested there wasn't a speaker/pad there...Personally I'm leaving it out of my design.

I've thought about it for a while and with the easy digital picture frame approach, there are basically two approaches to the electronics-
1- Replicate the graphics Metal would display in "real life". Treat the robot purely as a character.
2- Load him up with all kinds of cool snatcher related videos and sounds and treat the robot as a weird kind of Media Display device.

I'm first just going to do a picture, sound, and video media display kinda thing first which has a lot of cool possiblities.

I can just make one big video file of the game from a Youtube walkthrough that plays by itself or just have him play the entire soundtrack. He could also just cycle through random Metal Gear phrases all placed into one folder I believe. That would make it possible to make him at like he was "in character". Or maybe swap out the memory card to engage the "in character" version. Still have to play with the options.

Lots of options for "mkI" using just a digital photo frame for his brain.

As far as being able to play Snatcher on him, honestly I have no background in PC building so I hope to eventually find a capable person to help after I've completed the "MkI" version of MkII.

A fully functional PC inside Metal Gear open up kinds of weird possibilities. I could play an MSX Solid Snake game on him or go wifi with him and post on JunkerHQ forum! However hooking up a mouse and keyboard to a robot seems kinda dorky. He ends up just becoming a funky case mod.

I'd really like to get the head to move a little bit too but again I have no real life experience with servos and micro controllers for that kind of thing. Lots of tutorials online though for homemade animatronics.

Here's where I'm at with the blueprints-

I see your point about him being a weird case mod lol!
I also see tons of cool and weird possibilities for this project!

I build PC's, and I also have all Metal's phrases in a folder already if you need?

I'd love to invest in owning my own MKII once you get the process down etc., so count me in as a customer! lol!
If its just a cool little "toy" that I can watch pre-loaded movies on or listen to music with, or a PC mod of some kind...either way I'm %100 into this man!

I was just thinking about what could be done with a full PC inside and a couple cool thoughts came up.

Skype! With an internet connection and imbedding a camera into the robots head (or next to the screen for a better viewing angle), you could actually use your Metal Gear as a video phone to call people just like in the game!

Also you could run the animatronics from a USB port and coordinate it with dialogue.
http://www.youtube.com/watch?v=WYHU1CiMpbs

I looked into what it would take to make a talking skull for my Snatcher Skull project (which is surprisingly easy http://www.cowlacious.com/st-400-skull-kit/ ) but having a full computer inside opens up the options quite a bit.

Closing in on some good blueprints. Just a handful of details to work out at this point.

You know I thought suggesting a real camera and light for Metal's eyes would be over the top, so I didn't bother, but we are on the same page!

BTW: Nick love the blueprints!
If you need help with a Snatcher head...let me know...I'll provide reference material if you don't have it already.
Next stop is making a replica "Blaster" lol! (*seriously considered this already myself)
"DAMN SNATCHERS!"
Game Remake

This is incredible !
Kojima has to see this when it's done !

Check out my iPhone app : MGS2's Dog Tag Viewer to help you keep track of your dog tags in any version of MGS2.
Top

Mounting a light and camera into the head might be one of the EASIER things to do on this project. Fabricating all the physical parts is the tough and time consuming stuff.

I've been looking at the Arduino. Definitely a possibility down the line. Building the static version with lights and video monitor comes first. I'm going with the upgrade approach so I don't get overwhelmed.

Having the head move up and down with dialogue playing is a major goal in the future. One tricky thing with making the head rotate is that the Monitor Box is too close and the head would smack against it if Metal looked to the right at all. Weird design.

I hope Kojima does another signing tour like he did for Peacewalker. I'd love to get Metal signed. Maybe even present him with a copy if building the first one doesn't kill me first.

Here's the current blueprints with color added. Again the color scheme in the game shifts around all the time in the game graphics. Some silver buttons turn into red lights and even the the three eyes lens' colors constantly change.

Still not final but a good start.